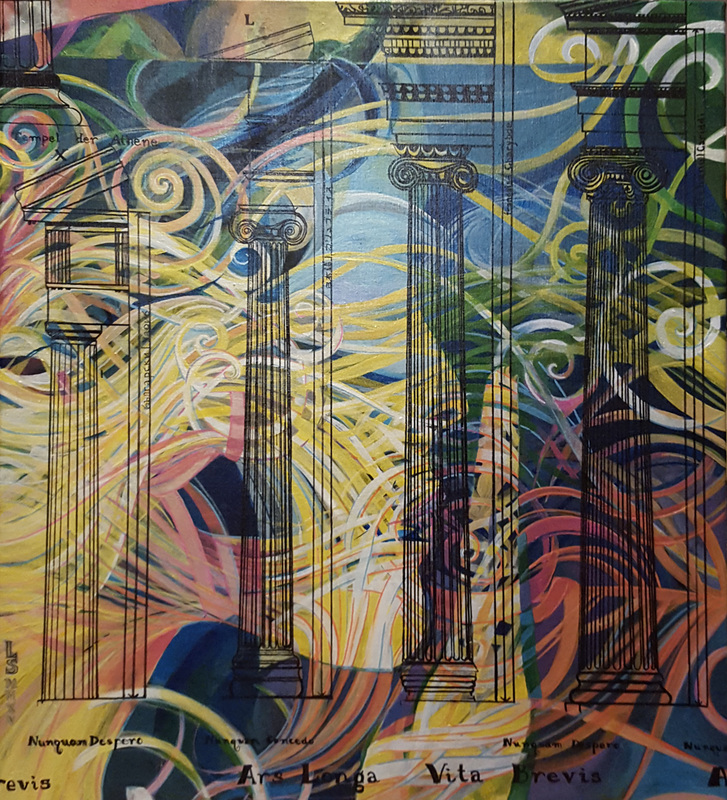 This painting is of the monster Charybdis.  According to the Encyclopedia Brittanica she was an immortal and irresistible monster who beset the narrow waters traversed by the hero Odysseus in his wanderings described in Homer's Oddesey, Book XII. Charybdis, who lurked under a tree a bowshot away on the shore opposite another monster Scylla, drank down and belched forth the waters thrice a day and was very dangerous. Her character was most likely the personification of a whirlpool.  The shipwrecked Odysseus barely escaped her clutches by clinging to a tree until the improvised raft that she swallowed floated to the surface again after many hours.

This painting of Charybdis is based on several different layers of images collaged in photoshop. One being of a woman and her hand, another hair, another spirals and peacock feathers referenced earlier on this page, another an architectural drawing of pillars from Roman and Greek Temples.  Each layer interacts with the one below it differently creating vibrant colors.  This digital image is then gridded and painted carefully, square by square onto the canvas.  With so many layers interacting together it was very slow going to keep track and not loose any of them.